I’m long overdue for a post here, I know.

In my defense, things have been a little dark lately, and in the few moments I’ve been able to come up for air, I haven’t felt at all like doing much of anything.  I’d blame the full moon I saw last week… 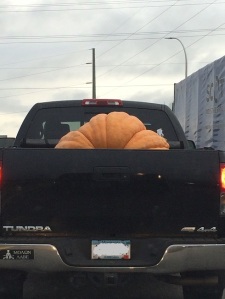 …or the odd weather we’ve been having… 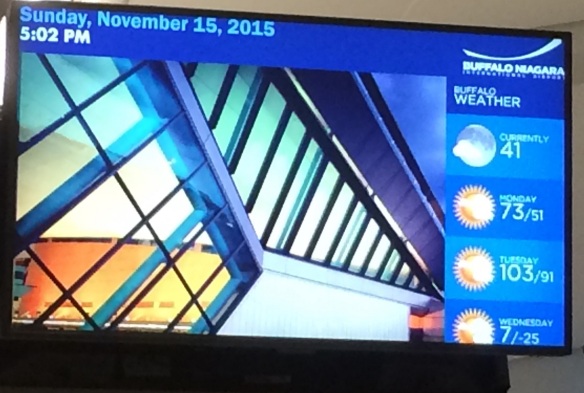 Actual weather report at actual terminal.  Fled in terror before Niagara Falls came to a boil.

…but I’m sure neither of these contributed much.

Plus, I’ve been wrapping up my annual super-busy period at work. At last count, I’ve read over 500 performance reviews, editing out “helpful” feedback and rewriting some of the comments so we don’t get our carcasses sued.  Here’s a sample of this year’s gems, fresh from the school of “I wish I were kidding”:

Mark is an expert fisherman and all the customers know that.  Because even though we do not sell any fishing paraphernalia, this subject comes up every time we need him to unload a truck or clean something and we hear his sudden andn intense passion in discussing his hobby in detail with anyone nearby.  (Mark is kind of my spirit animal.)

Joe does the best he can with his bum hip.  <cringe>

Sally is smart, but sometimes the men don’t think she knows much about our product line.  She needs to find a way to service these customers better.  I know she really trys.  <double cringe>

And my personal favorite for 2015:

Jim is an excellent associate.  He expertly fills all my holes.

<DELETE DELETE DELETE>  Well, right after I copy and paste and send to all my HR buddies.  Because HAHAHAHAHAHA

In my spare time <snort> I’m finishing up the last few days of Open Enrollment. For you non-US folks, the Open Enrollment period is the annual time where you can make your benefit selections for the following plan year.  This time period is usually about three weeks. OF SHEER HELL.

Let me tell you how this shiz goes down, from an HR perspective:

First, you get info from your carrier about how much they want to jack up your rates.  If they’re going easy on you, the screwing starts at 20%.  And this year, we have the plot twist of the Affordable Care Act (a.k.a. “Obamacare”.) Regardless of how you feel about that from a political standpoint, many of the insurance carriers are blaming it for additional increases of 5-10% ON TOP OF WHAT THEY WERE GONNA CHARGE YOU ANYWAY.

So you negotiate frantically between your broker, your carrier, and your executive team to try to patch together a plan that balances a value-added benefit with what the company can afford to offer.  In other words, you have to offer a plan that the shareholders will agree to AND won’t result in a parade of flaming torches and pitchforks when you roll it out to employees.

Basically, you need the Tooth Fairy to bring you a purple unicorn who speaks French and juggles.  Preferably a vegan one.

Next you schedule meetings and assemble books to explain benefits changes and rates.   You hold your meetings, hand out the materials.  Any questions?  Nope, we’re good, kthxbye.

Two and a half weeks go by.  Nothing else happens.  A tumbleweed blows by as you frantically fix the most garish typos and correct gender pronouns on the last of the performance reviews.  (You’d like to do a more thorough scrub, but the battle of too/to, your/you’re, and the over-apostrophication of every.freaking.word ending in “s”  has left you exhausted and stamping them with the seal of “Close Enough.”  Uncle already, UNCLE!)

Two days before Open Enrollment ends, people start to realize that the deadline is looming, and the monsoon hits.  You quickly shift gears to spend fourteen hours a day explaining the difference between an HSA and an FSA and an HDHP and a PPO in between complaints about “my benefits went up 5% but my raise was only 2%.” (Which I get, but these two things are totally unrelated.  Insurance is not a buy/sell retail item and it is NOT cheap for a company to offer.  Want proof?  Ask for your COBRA rates – that’s the true cost of the plan for the company.  Then come back and complain.  Oh, and you’re free to shop the marketplace and pay more for a plan with a higher deductible.  Really, have a look at how “affordable” the marketplace plans are.)

Suffice it to say I’m in the thick of my annual “lost all faith in humanity” period.

Just in time for the Thanksgiving weekend.

Which I spent eating popcorn in the airport watching the Eagles get totally spanked.

So is it any wonder that I’m out of wine?

Side note:  I drank this last week, too. It’s soooo gooooooood.  It’s mead.  I don’t know what mead is, other than I think Shakespeare drank it, or Monty Python did, or something, and it tastes like beer and wine made a baby that totally went to Harvard, yo.  So go get some. You’re welcome.  P.S.  Don’t let the hornet on the label scare you.  After getting about 1/3 of the way through the bottle, you’ll realize the bee isn’t menacing, but merely misunderstood, and really just needs a big ol’ hug. 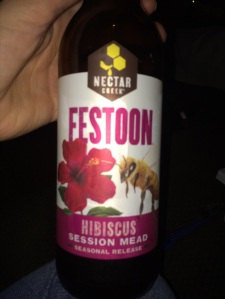 The brewer is Nectar Creek.  Sorry the pic is a bit blurry. It’s a big bottle. <hic>

But let me be clear about one thing.  When I’m texting you?  I’m not drunk.  It’s simply that my phone HATES ME.

I know I’m not alone in unfortunate autocorrects.  Part of the title of this post was actually from a comment on an older post – Chelise from Caterpillar to Butterfly posted “That’s my note atheist!” in a comment.

Any guess what she meant to say?

Clearly, the context cues lead you to “That’s my vote at least.”  Right?

This was easy for me to translate, because my phone has given me PLENTY of practice.  Let me show you.

Here’s a text sequence.  I was out with Kid #1, shopping.  We agreed to meet Kid #2 for dinner, and apparently he was getting hungry…. 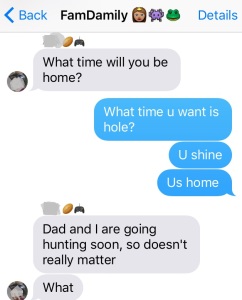 OK, that wasn’t too bad.  I got there, eventually.

So my son went out and shot a squirrel (GOOD, because squirrels SUCK), and it’s “later” now and he is most definitely STARRRRRRVINGGGG.  I ask him where he wants to go for food.  He suggests Taco Bell; I helpfully suggest some delicious alternatives. 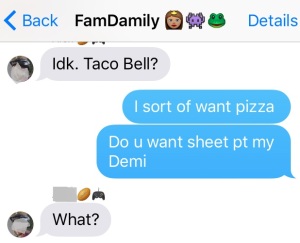 Bonus points to him – he’s so confused, he actually used punctuation. If you have teenagers, you know how significant – and rare – this is.

Since he was a little scared to guess what I was suggesting,  he stuck with leftover Chinese.  (I swear, I was only asking him if he wanted something from Sheetz or from this local place called NY Deli.  OBVIOUSLY.)

Later that night, Sis is out on a date.  He’s trolling YouTube videos on different gamer hacks, but now he can’t find his headphones.  He swore up and down he left them RIGHT HERE ON THE TABLE next to his sister’s phone charger…which was, of course, with her on her date.  We’d been running around all day, so they could have been anywhere.  I tell him to text Sis (in purple) to see if she has any ideas: 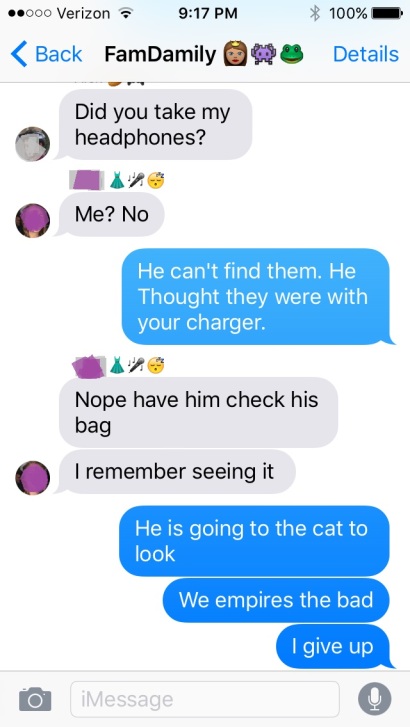 I’m not even going to tell you what I was trying to say here.  I’ll let you guess.  (OK, because I actually forgot.  Even I can’t figure it out.)

But I didn’t give up.  Daughter is on another date tonight, so, being the superhip mom I am,  I tried one more time to text her.  (Oh, and I called her boyfriend “Nemo” because he has an arm in a sling and I am a horrible person who told everyone at lunch today that he hurt it wrestling off a senior citizen in a Black Friday fight for the last $2.00 cami.  HAHAHAHA.)

Anyway, we ordered Chinese (which, apparently, we do a lot) and I wanted to see if we needed to save her anything: 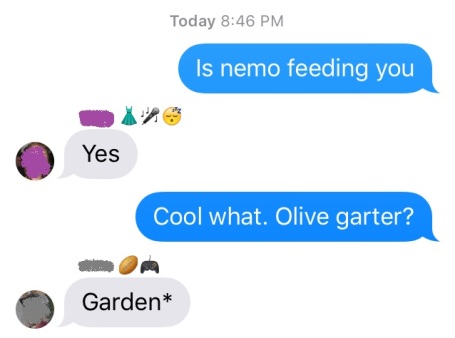 But, like I said, it’s been a rough week.  In Chicago, even the pastries seem to be having some sort of identity crisis: 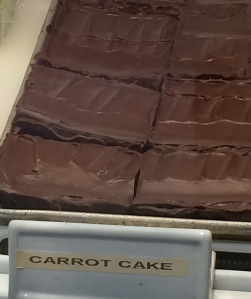 Actual pastry display in yet another actual airport.  THE CAKE IS A LIE.  A delicious, delicious lie.

So technology may lead me to some awkward communications, but a world where carrots taste like chocolate is a world worth hanging out in for a while.

Especially if THIS is how you airport: 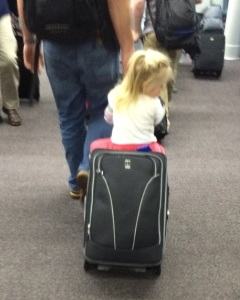 (Smart kid.  Seriously, why didn’t I think of that?)

25 thoughts on “That’s My Note Athiest! We Empires the Bad.”