DA RULZ:  For 3 days, post a quote and express what that quote means to you.  And nominate 3 other lucky bloggers to take the challenge as well.

Today’s quote kind of speaks for itself.  It’s one I started using years ago; to this day, I’m known for sharing it with my friends. 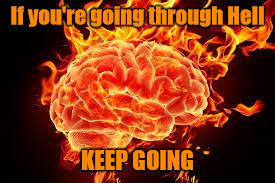 This quote is often attributed to Winston Churchill.  Although we aren’t entirely sure if it’s his, it may as well be.  You can read a lot of boring political and historical stuff on him, if you like – history isn’t my entertainment of choice, but it’s a pretty impressive list.  He made quite an impact for a dude of 5’6″.

Despite the historical snoozefest, he had a lot of interesting things to say:

“Success is not final, failure is not fatal: it is the courage to continue that counts.”

“You have enemies? Good. That means you’ve stood up for something, sometime in your life.”

“I may be drunk, Miss, but in the morning I will be sober and you will still be ugly.”

HAHAHA  HOW CAN YOU NOT LOVE THIS DUDE?

In my last post, I talked about the point in my life where I realized there was more to life, and to relationships, than emotional abuse, and had made the decision to leave my marriage.

What I didn’t fully understand when I made this decision was that the next eighteen months would be some of the most difficult days of my life.

First comes the challenge of separating yourself from an emotional abuser.  It’s a lot like trying to unscramble an egg.  You’re so used to the constant churning of the whisk that it’s tough to understand which of your muddled thoughts are yolk and which are the whites, and he’s always chucking in pieces of shell and other garbage to keep you second-, third-, and fourth-guessing yourself.

Even though you KNOW the yolk is yellow and the white is not, a champion manipulator that’s been chipping away at you for years can make you willing to accept that there’s no difference between yolk and shell, or that eggs are, in fact, blue and pink and pop out of a bloated bunny.

I threw a few additional stressors in my life, too.  For starters, I accepted a promotion and transfer at work; my new job was 60 miles away.

When I started my new role, I discovered that the plant was smack-dab in the middle of a unionization campaign.  From the Steelworkers.  In Pittsburgh.  (This is essentially fighting the enemy on their home turf; you’re battling tradition and “local values” in addition to trying to fix a broken workplace culture.  Ask an HR person how much fun this can be.  It’s not for the inexperienced, unless you relish being doused in A1 and set out for the wolves.)

And, of course, I had to relocate.  There were plenty of houses available – but the challenge was paying for one.  I was still on the mortgage at the house I shared with my ex; this significantly reduced the amount I could spend on a house.  And no, he wasn’t interested in refinancing, or actually divorcing, come to think of it, so I was stuck.

Finally, after obtaining a first – and second – mortgage on a property, I was able to move.  Then came the segregating of the household goods.  One bright spot:  my then-spouse was a bit of a hoarder, never getting rid of extra things, so I was actually able to pack up quite a few things we had never used (NEVER.  IN OVER 10 YEARS OF MARRIAGE) and other than buying silverware, I had a mostly-stocked kitchen.  But when the movers came, he refused to let me take either one of the dining room tables, even though I had purchased one set with a gift from my uncle.  Even though I was leaving all the antiques we had collected over the years.

It’s just stuff, right?  I was leaving with something far more precious – my soul.  It was bruised and battered, but still alive.

Then, as I arrived at my new house, I saw a note taped to the door.

It was a court order for alimony.  ALIMONY.  Because he hadn’t worked in years, and I had been the sole provider.  Yes, he was able-bodied; he had a master’s degree in education and COULD work…he just chose not to.  And now, I was legally obligated to support him.

There’s a “stress scale” that’s often referenced – if you have enough stressors at the same time, supposedly you’re at risk for illness.  You don’t have to be terribly good at math to know I was scoring pretty high here.

It was the tipping point.  I was ready to break.

I just couldn’t do this.

It was too much.

It was too hard.

It would be easier, right?

I could give up.

I could go back, but it would kill me.

I resolved to stay strong.  I stopped asking “Why me?” and instead shook my fist at the universe and said “BRING.  IT.  ON.”

I closed on my house.

I negotiated a lower alimony.

I bought a keyboard instead of a kitchen table, because music makes me happy.

We defeated the Steelworkers by a two-thirds vote.

I was surrounded by flames, and chose to dance. 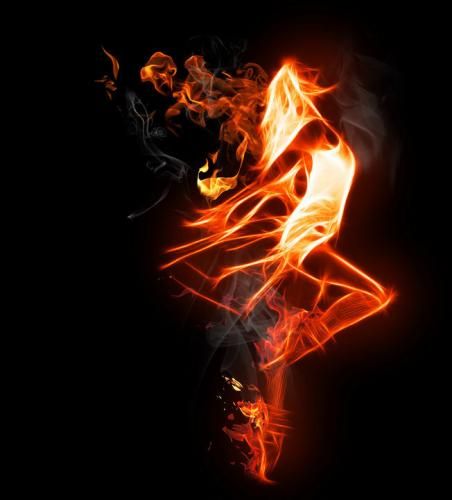 My divorce took nearly three years to complete – he fought me every step of the way.  Somehow, I kept going.  I kept my focus on where I wanted to be, and slowly made my way through the pricker bushes and rattlesnakes.

If you’re going through Hell….keep going.  It’s the only way out. The only way through.

There’s a new song playing these days; you might hear it on your local pop station.  The lyrics really caught my ear and reminded me how far I’ve come:

My final nominee:  kbailey374 at Walking After Midnight.  She’s legit in the water today so she gets to be today’s sucker.  😉