Warning: Dark post ahead. I should probably label this with “trigger warning” for the delicate flowers, but this isn’t a designated safe space, so enter at your own risk. I’m gonna talk about stuff that I shouldn’t be doing. You were warned.

<sigh> This post has been difficult to write. I’ve been knitting it and unraveling it in my head for a couple of weeks, debating whether I’m brave enough to put it out there or if I should continue to pretend it didn’t happen.  At this point, though, the latter isn’t working.

I don’t think I can truly pick myself up until I admit to myself how hard I fell down.

I know HOW it happened. Honestly, I should have expected it. It’s been happening for years, off and on, in unpredictable cycles. Like a well-trained ninja, it lurks in the shadows of my being, camouflaging itself behind my arrogant confidence that I’ve really got a handle on things this time, waiting to pounce in the blink of a vulnerable moment.

I’d been coasting along for weeks in a false sense of security: I’ve been having phenomenal success on a new medication that’s quelled my omnipresent anxiety and quieted it to an occasional flare of “wait…I should be, like, worrying about something right now, right?” that I’ve been able to squash like a bothersome gnat. In other words, it’s been quite manageable.

And I’d been rocking my personal fitness. I was running four miles 3 days a week, and mixing in yoga, too. I was cooking – actual food – with vegetables and quinoa and organically-raised tofu harvested by free-range leprechauns. (Close enough.)  I was nourishing myself.

Everything else was…calm.  Peaceful. The hubs had been treating me like a queen. The kids are doing wonderfully. My daughter had just finished her first year of college with <shameless Mom brag> a 4.0.  My son, a junior this year, has a darling new girlfriend. The situation with my stepsons, while not resolved, has stabilized. I don’t have any significant job stress. Mom was doing great – she was preparing to close out her and Dad’s business, and she has a…um…gentleman caller (?) who spoils her.

Side note: What exactly DO you call it when your 70ish-year-old mother is dating? “Boyfriend” sounds kinda juvenile, while “significant other” implies some sort of long-term commitment. And “friend”….yeah, no. You can just HEAR the air quotes when people say it. “…and this is Mom’s ‘friend’ Bob.” Try it. See?!?

Side note #2: Should I feel weird about Mom dating? Because I totally don’t. Well, except that the guy she’s seeing is actually the father of my first ever real boyfriend. (Hurrah for small towns.) So, even though that was thirty (!!!) years ago, I sort of feel like I accidentally kissed my brother. But on the flip side, that means that I know this guy, and somehow, that’s comforting – he’s not a complete stranger. His wife passed several months ago, and as I recall, she wasn’t exactly a fan of me being in her son’s life because apparently, I had evil spirits floating around me. Anyway, I like the man and I love that she’s happy.

In summary, things were going smoothly.

The calm before the storm.

Then Mother’s Day weekend arrived. I wasn’t expecting any grand gestures, but the kids were aware, at least. We had a decent weekend planned – my son was getting ready to go to Prom on Saturday, and we’d have a quick lunch on Sunday before they went to their father’s and I got back on a plane.

Prom day was lovely. The weather had promised rain but surprised us with sunshine. The plan for the day was to head over to the girlfriend’s house mid-day, where my son (read: “we”) would cook dinner for the two of them. Then they’d put on their fancy duds and tolerate a few pictures before heading to the festivities.

And it went so well. My son and I worked together to prepare General Tso’s Chicken; I chopped the meat while he found pans and serving bowls. We opened sparkling juice and toasted the day. 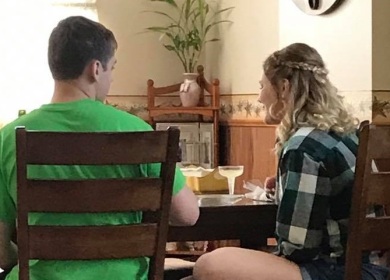 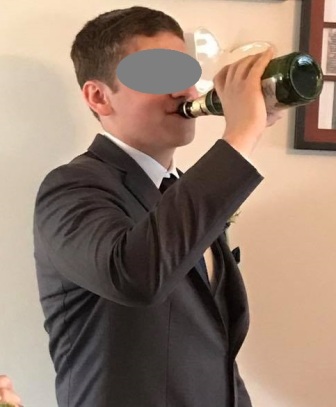 After we Googled how to tie a necktie, we were ready for pictures. We skipped the usual local haunts (a quick drive-by indicated an intolerable crowd) and headed to his father’s house, where I knew the azaleas would be in full bloom. (I offered to take them to the local funeral home, or the cemetery, because OF COURSE there’d be fresh flowers there. But they declined. Sheesh, where is the sense of adventure? Kids today….) I snapped away, capturing the smiles. I even got some terrific shots of my son with his father that I know they’ll both treasure.  (I am SUCH a big person, ain’t I??) 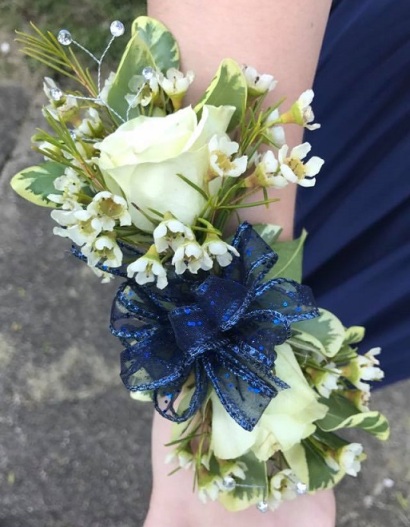 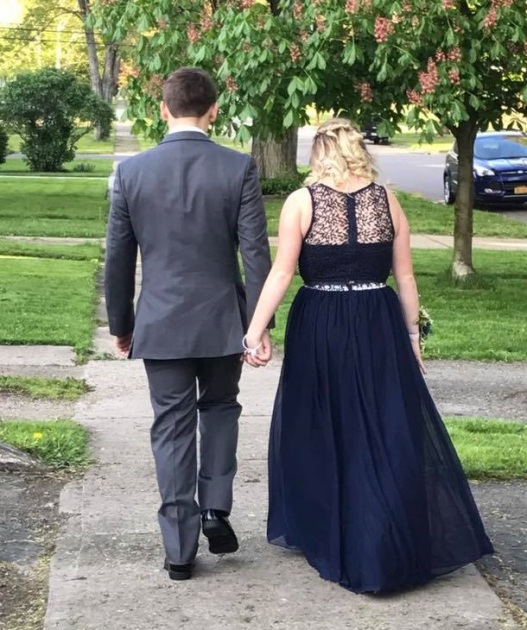 Shortly, the lovebirds were off to the dance. I met up with my daughter and her boyfriend and settled in to some serious Netflix. My daughter is really digging conspiracy theories lately, and yeah, there’s a series for that, believe it or not. Even though we’d ordered pizzas, her boyfriend, being a young man with an age-appropriate metabolism, brought “snacks” so we wouldn’t starve to death for the three hours we’d be sitting on our butts. His stash included two family-size bags of chips, a batch of beef stew, a kitchen-sink sized bowl of buttered popcorn, and two six-packs of soda.

Eventually, the two of them headed off to host an after-prom party.

With the food. (Except the stew. I convinced him to take that home with him.)

So that’s HOW it happened. I just don’t know WHY.

Down went the family-sized bag of salt and vinegar chips and the rest of the popcorn. Even though I’d finished my gluten-free pizza earlier, I added a few slices of their leftovers to the frenzy. Then I headed off to Wal-Mart to top off the mess with a pint of Ben & Jerry’s finest.

Why not?  It didn’t matter. It’d be gone shortly.

I hadn’t done this in years. Decades, maybe. Sure, I’ve binged, but I’ve avoided sticking my toe back into the purging pool. Overeating is somewhat socially acceptable; we can half-ashamedly confess eating a doughnut we didn’t need or an extra slice of cake. Barfing, though, is still done behind closed doors.

Now, it was time.

I’d forgotten how hard this was. How violent. The body was not meant to do this. Yet, like riding the proverbial bicycle, mine eventually remembers.

Panting, gagging, my stomach rolls and heaves. I’m undressed from the waist down and perched atop a pile of lightly-used towels, as the bladder of a middle-aged woman can no longer bear the seismic onslaught forced upon it by making yourself vomit.

This is not an affliction for the proud.

Eventually, it’s over. I feel like a dishrag that’s been left at the bottom of the sink, sodden and heavy and unable to take any shape or form.

I clean up and try to sleep.

The next day, I carry the weight of my sins. My tongue feels as though I’ve burned it; my jaw aches like I’ve been chewing bowling balls.  Belches bring an acidic, burning reminder to the back of my throat. And to my heart.

It’s Mother’s Day. The sun’s out again. And the kids actually remember, bringing me cards and presents for the first time in maybe ever. The hubs surprises me with flowers, which showcase my favorite colors. 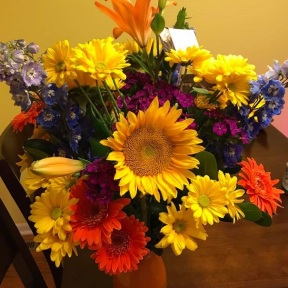 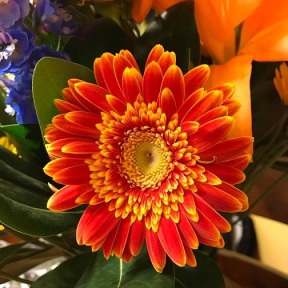 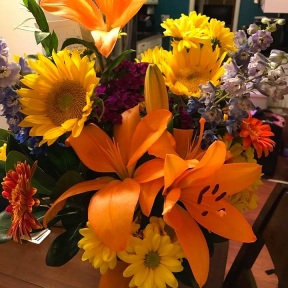 I am reminded that I am loved. And that today, I can start over. Reset the timer. 1 day since my last purge.

I can’t say this will never happen again. I’ve learned that swearing “never” is a cue for the fates to set up an elaborate exercise in irony.

But I don’t honestly have any idea why this happened. Why now, when things were going (relatively) fine? Why not when my dad died, or when the hubs and I were having more serious issues, or when my stepson was in the hospital? Why did this cap off a beautiful day bookended by my awesome kids?

And if I don’t know what caused this, how do I keep it from happening again? Was this a momentary lapse, or the beginning of a final descent? Was this random or a result? Fluke or fault line?

It’s unnerving. But I suppose that’s the crux of mental illness. If we could always control it, it wouldn’t be an illness, right?

Things have been…well…not great since then. I’ve done some exercise and a ton of eating. Zero days since my last binge. I’m blaming a canceled flight and an unplanned night in beautiful downtown Detroilet for the pizza and two candy bars I ate alone in my hotel room while watching (ironically) My 600-Pound Life for the most recent one.

I’ve kept it all down, though, and I suppose I have to remember to count that as a victory. Because the ninja still calls to me, whispering from the sink, the refrigerator, the checkout aisle. I’d learned to tune her out, and I need to ensure I have sufficient white noise in my life to block her song. Her voice is the mental mermaid that always tempts toward a tumultuous sea.

Sometimes, my footing slips on the rocks as the surf tugs at my toes.

Today, I hang on.

12 thoughts on “The Indelible Ninja Scars”