Since you’re all quite figuratively dying for an update….

No.  The landscaping isn’t done yet.

But it’s not due to lack of effort…if by “effort” you mean I glance at the stack of edging rocks collecting pollen beside my driveway every day when I’m tooling into the garage after work wondering what’s for supper.

In my defense, there’s been a bunch of other shiz going on this past month, too.

First up – I had a birthday.  (Shout out to my fellow Gemini peeps.)  Now, normally, this would be largely a non-event.  I’m not one who needs a huge fuss on her birthday.  I mean, first of all, I’m probably dieting, so it’s not like I’m getting any actual cake, right?  For the most part, I’m happy just getting a few cards, and having one day with a steady stream of Facebook notifications from folks who but for the gift of technology would neither know (nor care) about your special day.

And if you remember, last year’s birthday was kind of a bust.  I didn’t get even a mention of the day from the hubs.

(Side note:  This year, he did remember to at least wish me a happy birthday.  Still waiting for that card.  So much for managing my own expectations, I guess.)

This year, I decided to proactively treat myself.  BY SHOPPING. Because obviously, I am worth it.

Without further ado, I bring you the 2016 Birthday Loot Review.

**NOTE:  Men and non-shoppers can scroll down to the next bold green words.**

Since I shop a lot (A hella lot.  Hello, my name is Kate, I have A Problem) I have quite a few store-branded credit cards.  Now, if you use these cards, you absolutely HAVE to pay them off in full every month, because they charge an astronomical interest rate that will make your $50 sweater purchase rival the national debt in a matter of months.  But, as a token of gratitude for your patronage, many of them send you “Free Gift on Your Birthday” coupons.  Usually it’s $10-15 off any purchase – no minimum.  So, at that point, it’s Game On! to see how much you can bag for essentially free. 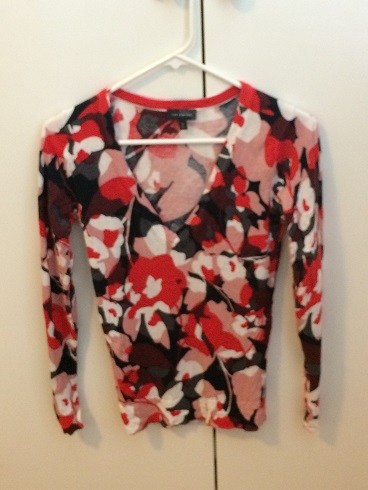 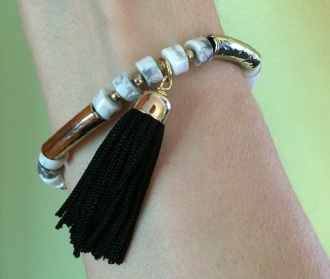 I still have $15 at NY & Company and Ann Taylor to use before the end of the month.  CHALLENGE ACCEPTED.  Yay free stuff!

I also spent a day at one of the regional art (read: jewelry) fairs.  We happened to have three local shows going on at the same time (because we hippies are into crafts, yo) so we opted for the slightly more rural locale in a nearby quaint river town. 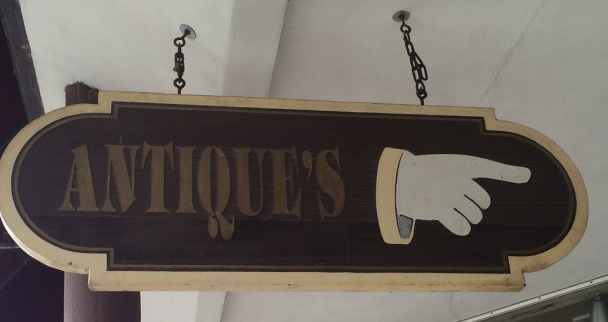 That’s…a little TOO quaint. DOWN WITH OVERAPOSTROPHICATION!

Bonus:  It was cloudy and threatening rain, so it wasn’t too crowded.  Makes it MUCH easier to paw through everything when you’re not elbowing other shoppers out of the way and stroller-dodging the strapped-down rug rats. 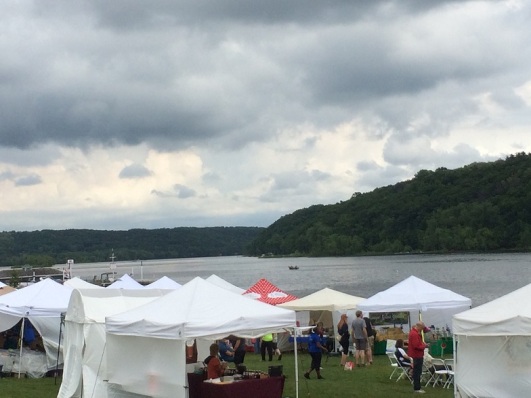 With the weather on my side, it didn’t take me long to walk away with some new bling.

On this one, the artist made all the beads by hand.  Some were forged, some were polished, some were hand-twisted, others were…uh…baked?  X-rayed?  Spelunked?  Anyway, it’s super cute and goes with everything:

This one was probably made in China, but I don’t give a rip because PRETTY (and goes with everything ELSE):

This hand-drawn sketch is for my daughter’s room, because she has a thing for pie:

And this shawl was on the clearance rack in a tourist shop…not a bad $12 find, especially if your favorite color’s orange!

Wanna place bets on how long my cats take to demolish the fringe on this baby?

I also treated myself to some new nose bling.  And I NEED to share this jeweler with you, because her stuff is FABULOUS.  I was hunting around Etsy looking for pieces that don’t look like every other boring, jewel-dot nose stud on the planet, and I stumbled upon a shop called RockYourNose.

And I am SO IN LOVE with this lady’s stuff.

I had previously acquired these:

I was so pleased with them – the quality, the size, the service – everything – that I decided I needed some more:

If you need nose jewelry that makes a statement, go visit RockYourNose right this minute.  Seriously, her pieces are beautiful, bold, and comfortable to boot.   I WANT THEM ALL.  (Well, maybe not the rat, but I totally appreciate that there’s an audience for it.)

While I was scouring Etsy, I did find a couple other pieces that I JUST HAD TO HAVE.  This one arrived today:

He sent it with a penny from his home country!  Etsy shop: PicoNosePiercing

And this one is waiting for my signature at the post office: This one was a real find.  I collect frogs, so OF COURSE I should have a frog nose stud.  But do you think anyone actually MAKES one?  Well, apparently, only ONE person does, and they live in Israel, but thanks to the Interwebs, I CAN HAZ NOSE FROGGIE.

So…another thing I did this month:  I wrote my first article for xoJane.

Now, before I share the article, let me just state that I’m…not proud of the subject matter.  I’ve written about this subject before, and I’m not sure why I decided to bring it up again.  Perhaps it has to do with my attempts at healing.  Or maybe even though it was a long time ago, and I have no way to undo it, I haven’t completely forgiven myself.  Either way, it’s a very real part of my past from a very dark, confusing, overwhelming time.  While it certainly doesn’t mean I’m glad it happened, you can’t exactly unbake a cake, and I got several life lessons out of it.

So I put myself out there, and <deep breath> here it is:  Kate’s First xoJane Article

I’ll admit that the comments were pretty rough – but that’s to be expected.  I mean, you don’t go writing about that sort of thing and expect the internet to throw you a ticker-tape parade screaming your accolades, right?  It’s more self-righteous indignation and flaming torches (and not completely unjustified, either.)  People reacted pretty much how you’d expect, and I’m (mostly) OK with that.

What really DID sting, though, were the criticisms of my actual writing.  (And NOW I sound kind of narcissistic and whiny.)  But…I don’t think I’m an awful writer.  Juvenile?  Sure.  Immature?  DUH.  But…not terrible.  (And come ON – Sick of CAKE?! That is SO NOT A THING.)  I’m trying to console myself with the realization that 1) sometimes, people on the Interwebz are randomly mean because they CAN be and 2) perhaps my writing isn’t a style they care for.  And that’s OK…but, like a hangnail that you’ve caught on an afghan, it pulls and smarts all the same.

(Side note:  xoJane was wonderful to work with.  They made it really easy by outlining the process thoroughly, patiently suggesting edits to this complete noob.  Despite the icky feelings I got in my gut from the Mean Girls (and, to be fair, the honest ones), I might actually be tempted to try again.  Besides…I made $50.  Which is TOTALLY AWESOME, because I have a lot of bling to finance, as referenced above.  So there’s that.)

Oddly, the article was published on the same night that my daughter graduated high school.  (Which is the OTHER Big Time Eater I had this month.)

I was scrolling through Facebook while I was waiting for commencement to start, and saw the article link just as the lights were dimming in the auditorium.  I skimmed a few of the comments, and shut off my phone to deal with the virtual wrath later.  I’m somewhat proud of myself for that one – normally, I’d be obsessively refreshing to see every last post the moment the user clicks “send.”

But this night was about my daughter, not me.

So off the phone went, and I stuffed it and the accompanying anxiety deep into my purse.

In addition to ordering invitations, sending announcements, and taking TONS of pictures, I also planned a party for her – meaning, I co-hosted a huge shindig with her dad.  Which is monumental because we had a pretty ugly divorce in 2006 (that started in 2003!) and it’s only been maybe the last 18 months where he and I could go beyond stiff politeness and overwhelming mistrust to being kinda cordial once in a while.

But all the families, on both sides, who hadn’t seen each other in over ten years, ACTUALLY GOT ALONG.  There was small talk, there was hand-shaking, there was the exchange of genuine “how have you beens”and “what are you up tos”.

Everyone set aside the old hurts and haunts and just…celebrated.

And we had a lot to celebrate – namely, the achievements of this terrific kid of mine who <shameless brag> graduated third in her class and earned a full scholarship to college.

And afterwards, this amazing young woman pulled me aside and thanked me profusely for making the day run so smoothly.

It was a beautiful celebration of a milestone – a marker in time. A crown on the ability of her parents to work together and co-parent, and, despite being a little too human, have it turn out FABULOUSLY.

So, now that June is pretty much over, I’m hoping things settle down a bit and I can get back to the very hard, back-breaking, gritty work that is my marriage.

Or maybe I’ll address the landscaping first.  That might be easier.

28 thoughts on “June Was Blingin’ out All Over”