So I mentioned in my last post that I was in Orlando last week at a safety conference.

Normally, these things are a royal snoozefest – hour upon hour of lectures surrounding the intricacies of 29 CFR, Part 1910 of OSHA.

Two days to cover updates, changes, and best practices of over 800 pages of Workplace Safety is just about as exciting as it sounds.  The most interesting part is often the various methodologies the participants exercise in order to stay awake.  Gone are the days of propping your eyelids open with toothpicks (1910.1030, Bloodborne Pathogens) or affixing them to your forehead with tape (1910.1200, Appendix A,  A.2 and A.3 Skin/Eye Irritation.)  Nowadays, we’re limited to the safer methods of caffeine overdose, smartphone distraction, and frequent shifting of position.

In other words, we’re a group of hyper-caffeinated, mentally under-stimulated, fidgety students.  Not a great combination.  And often, you follow this with a “networking event” in the evening.  There’s typically great food AND an open bar (an act of mercy, given the day’s mind-numbing subject matter.)  But by this time…

Well, it’s kind of like electricity.  Let’s science a minute:

Here in the US, the standard power for your basic outlet is 110 volts.  (And our outlets look like a slightly horrified cartoon character):

Mine has bags under his eyes from the power saw.  Ironically, this one is powering the coffee maker.

In Europe, the outlets are 220v, not 110v.  Plus, they LOOK different.  (You can see some examples here.)  This should eliminate the possibility of ramming the plug of your $250 110v ionic hair dryer’s plug into a 220v outlet and subsequently turning its insides into a molten burnt-plastic omelet.  If you live in the US, and want to use your hair dryer* in Europe, you need a special pluggy-in thingy in order to get it to work.

*Side note:  Hair dryers have gotten WAY more complicated since the days of Sun-In and Aqua Net.  In addition to coming with a dental kit’s worth of attachments and add-ons, they NOW have technology that breaks down water molecules in order to have them evaporate from your hair faster.  What the what?  I kid you not – read it here.  Although I must add that I take serious issue with the concept of being able to purchase such a finely calibrated instrument DIRECTLY OFF THE SHELF, without ID or ANYTHING (I mean, you have to flash a license to buy freaking COLD MEDICINE, yo) yet UL still feels compelled to attach a tag warning the user not to use it in the bathtub.

Where am I going with this?  Well, your roomful of safety professionals normally runs around 110v.  But confining them in a conference room all day with coffee as the only entertainment, and then releasing them to a night of free booze is essentially plugging them into the 220v without an adapter.  There’s a lot of horrific noise and smoke as the internal motors buzz, snap, and hiss.  They start out the evening looking less like the US outlets, and more like the Danish one.  Wheeeeeee!!!!! 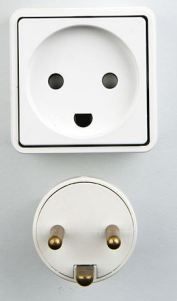 But fast forward to the next morning at 8 AM and you’d swear you were witnessing a zombie invasion, except no one is interested in anything but more coffee.  And possibly bacon.  And we’re all looking sorta like this:

I will confess, unofficially, that I did not emerge unscathed.  I came home with five (!!) extra pounds**, and I’m told there’s a video somewhere of me doing a mean Carrie Underwood at the karaoke bar.

I expected the bulk of the conference to be a sobering contrast to “networking.”  This week’s conference, however, was decidedly different.  And it kicked me right in the feels.  I’m trying to capture the impact that it, and the events of the weekend, had on me, and I’m not quite there yet.  But I’ll get to that on my next post.

**Speaking of weight – which I know I haven’t done in awhile – let’s talk about conference food for a minute here.  I find it more than slightly ironic that you spend all day learning about safety, but as soon as you’re not in session, you’re encouraged to pursue obesity, alcoholism, or both.

Don’t believe me?  Here’s the menu:

Breakfast – Trays upon trays of scrambled eggs -with cheese, obviously.  Bacon and fried potatoes.  Muffins the size of softballs.  (Thankfully, there was fresh fruit, too, and lots of it.  Apparently you couldn’t really see it behind Mount Bakemore.)

Lunch – A buffet that included chicken AND steak AND chili.  Creamy pasta salad on the side, as well as fried potatoes (wedges, not shredded this time.)  AND THREE DIFFERENT GIANT LAYER CAKES.  Oh, and a bowl of lettuce and tomatoes that I’m calling “salad.”

Snack – Yes, at 2:30, just two hours AFTER lunch, we got fed AGAIN.  But it wasn’t just snacks – it was food with a THEME:  Movie Concessions.  Huge soft pretzels – with frosting or mustard.  Buttered popcorn and giant movie-theater boxes to eat it from.  Those ginormous movie-sized boxes of candy – Junior Mints, Swedish Fish, Sno-caps, M&Ms. And six different kinds of soda.  I know it sounds excessive, but dinner was nearly four hours away, man….

Dinner was at Universal Studios and after the 2nd glass of wine I lost track of the food.  But here’s my best, albeit blurry, recollection:  Jerk chicken skewers, muffuletta sandwiches, crispy jerk wings, cheese fondue fountain with veggie and cracker dippers, beef sliders, burger sliders, jambalaya, and a giant table (OK, it was pretty much a small stage) of cookies.  Oh, and an ice cream cart.  And an open bar (I may have mentioned that….)

Surprisingly, I really didn’t eat that much at the conference.  I stuck to chicken, veggies, and fruit.  (Bravo.  Go me.)  Except then I got to the airport to go home, and was attempting to decompress from the conference and some other bad news (more on that in my next post) and I completely fell off the rails, inhaling a burrito bowl with all the fixings and, once I got home, an entire bag of popcorn and a giant Concrete Mixer from Culver’s.

And THAT’S where the five pounds came from.  Comfort eating in the form of bad airport food and wine.

Emotional week or no, it’s back to the drawing board.