For the last couple of weeks, I’ve had something kicking the sides of my cranium trying to work its way out.  It’s done quite a bit to try and capture my attention, distracting me from intense post-season NFL matchups and Sunday morning sermons.  Impressive for an intangible product of my imagination.  Even more impressive, it’s not about food.

What’s been festering in my frontal lobe?

(Well, it beats staring at my thighs trying in vain, yet again, to suck them in.)

Everybody loves a good purse, right?  Well, women, anyway.  And some dudes.  NOTHING WRONG WITH THAT and I DO NOT JUDGE.

I’m not sure exactly at what age I started carrying a purse.  I’m guessing it coincided somewhat with puberty – the age where you suddenly NEED to have, at all times, concealer, frosted eye shadow and neon-blue mascara  (hey, it was the 80s, and I bet if I looked at YOUR yearbook, your regrettable decisions would be documented, too),  and <whispers> Certain Feminine Hygiene Products We All Carry But No One Must Suspect You Have Because You Would, Like, Die.

Oh, and lip gloss.  I think that was the official sign of Becoming a Woman – you graduated from either Cherry Chapstick, or this (which came in a tin and you kept in the pocket of your Lee jeans):

In retrospect, these were actually pretty horrible.  Essentially, you were putting corn syrup on your lips.  Sure, it was delicious, but I can’t say I’d be puckering up to that sticky, smeary mess.  Especially with an inexperienced kisser.  Then again, I’m not a dude.  Curious, I asked the hubs how he felt about smooching on someone with gloopy, shiny lip gloss.  He shrugged and said, “Wouldn’t slow me down.”   (I will never understand men.  And, speaking of men…if this stuff is supposed to ATTRACT men, why doesn’t it taste like bacon instead of bubble gum?)

Because I don’t really do anything halfway*, once I started carrying a purse, I used a really BIG purse.  Something like a hobo bag – big enough to carry all the things I absolutely, positively COULD NOT be without for an hour (read:  a wallet and a ton of useless crapola), but NOT big enough to be called a tote bag (or suitcase.  Although I suppose that’s just semantics, really.)

*Except stuff like cleaning the bathroom.  Because sometimes, a C+ effort is plenty, and because eeeewwww.

Funny thing about space – we fill it almost as soon as we acquire it.  (Quick quiz to prove my point:  Do you have any empty cupboards in your kitchen?  Unoccupied drawers in your desk?  Unfilled shelves in your pantry or linen closet?  If you do, you’re in the minority, and basically probably not even a true American, because along with our fast food, we like our useless piles of stuff.)

Rifling through my purse, looking for the latest misplaced item, my brother would lean over, look inside, and joke, “Oh, there’s my ski!”  He affectionately called it “The Abyss” and threatened to hide my sister in there, where she’d clearly never be seen again.

I kept using storage-closet-sized purses well into adulthood.  Once I had kids, I had to add entertainment to the variety show in my handbag.  So crayons, stickers, antibacterial wipes, sunscreen, fruit snacks, and Cheerios got added to the portable flea market.

It was nice to carry a convenience store on my shoulder – but I still hadn’t mastered the challenge of organization.   All of my “essentials” were in a jumbled heap in the bottom of the Pocketbook Black Hole.  After grocery shopping, I’d stand on my front doorstep, impatiently shaking my purse, listening for the metal clink of what would (hopefully) be the keys to my house, attempting to locate them before Ben and Jerry  melted into a depressing puddle of ooze.  Other times, I’d carelessly toss my phone in there before leaving the house; later, walking around the mall, a small voice beside me would pipe up, “Mommy?  Your purse is ringing.”  I’d frantically rifle through the contents, ineffectively calling out to it, “Hold on, I’m coming!  I can HEAR you, I just can’t FIND you!”  (Ah well.  I can always call them back.)

I have several friends who collect purses.  Coach, Dooney & Bourke, Vera Bradley, Kate Spade, and Louis Vuitton.   Since I spend most of my money on shoes, I’m more of a “what’s on sale at Kohl’s” kinda gal.

And I’ll let you in on a secret:  I actually only own one purse at a time.

(Yeah, I know, if it weren’t for my shoe collection, you’d be banging my door down trying to get me to relinquish my Girl Card.)

Don’t get me wrong – I truly can appreciate a really nice handbag.  But, frankly?  I’m lazy.  Remember, I’m schlepping around a boatload of miscellaneous (yet ESSENTIAL) items – the thought of transferring all that rando shiz from one bag to another just so it’ll match my shoes is EXHAUSTING.

So I buy one bag, use it until it falls apart, and then begin the arduous task of relocating all of the contents to their new home.  It’s not unlike moving a two-bedroom apartment, really.  I just don’t have to repaint.

Recently, the piping started to peel off my current bag.  Reluctantly, I started the search for its replacement.  This was a GREAT bag.  Well under $50 at Kohl’s, BEFORE the coupons and discounts.  And bonus: it had a bajillion pockets, so I could actually organize things.  (Hubs:  “Or have more places to lose things.”  WHATEVER. <eyeroll>)

<sniff>  It was a good soldier.  I wanted to post pictures, in reverence, but as you can see, I was mercilessly photobombed by an attention-whore tabby:

See all the pockets?  (They’re behind the cat.)  And to help me further organize, I bought a giant wallet – an organizer WITHIN an organizer!  (Heloise should be sending me an award shortly.) 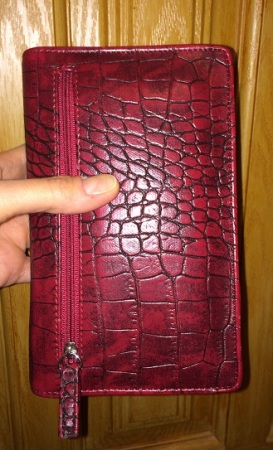 Also a superbargain at Kohl’s.

The smart thing about this clutch is that it has a detachable strap, which, since I travel a lot, I keep in my airport carryon.  So, when I’m gonna be out of town, this goes in my backpack, along with my laptop, sewing kit, sunglasses, headphones, gluten-free snacks, gum, Advil, and bottled water.

That makes my backpack just another purse, doesn’t it.

Anyway, I just bought a new purse.  Well, I bought it about a month ago, but procrastination + lazy + funk meant I was going to haul around a beat-up, falling-apart purse for awhile, while the bright, pretty new one hung in anticipation by the door.

While I’m still feeling pretty blahbulous, I did manage the purse transfer.  Here’s my new companion:

Isn’t it cute?  I bought this one** at the World Jubilee Fair – it’s a market where they sell crafts from around the world; the funds go to support…um…oppressed women or something.

(I probably should have been paying better attention.  But it sounded sort of like this:  blah blah blah in the country of blah blah women blah blah self-sufficient blah blah blah OOH LOOK SCARVES AND PURSES AND JEWELRYYYYYYY.  And yes, I binge-bought, but at least it helped the planet or something.  Right?)

**It didn’t come with the little state*** key fob.  Or the pepper spray.  Those were after-market upgrades.

The beauty of this bag is that, in addition to being ergonomic, it has TONS OF POCKETS.  Score!

So there’s room for EVERYTHING.  All the essentials listed above, AND a mini first aid kit, generic Advil, a taser, my work badge, a tape measure, and my grown-up lip balm of choice:

I even have room for these guys:

Although why they’ve taken up residence in my purse remains a mystery.

So what’s your bag?  What do you carry?  What’s the oddest thing – and the best weapon – in there right now?

36 thoughts on “The Purse of a Person”