So I have some stuff I need to get out of my head and write about, but I’m procrastinating, because it’s kind of painful and therefore feels like work.  Which I have no interest in starting, contemplating, or completing today.  BECAUSE WEEKEND. Plus, I’m really, really good at procrastination. It’s the zippy convertible I use to drive through life – tight corners on two wheels, slamming into the last available parking space thirty seconds before the show begins.  WHAT. A. RUSH.

(And yes, I recognize that life would PROBABLY be a lot less stressful if I actually planned out things and allowed ample time to complete them, and this last-minute-Charlie thing I’m sporting feeds my anxiety like fertilizer on corn in July.  But dat’s how I roll, yo.  It’s as much a part of me as curly hair and birthmarks, and I’m not sure I could change it if I tried.)

Merry Christmas to me, yo.

So, since I’ve spent my shoe allowance for December (and probably most of 2016), and have to clean out some old shoes to make room for these, I’ll clean out my blog awards closet, too, and post one of the awards that’s been sitting in my drafts folder for a bit.

So, without further ado… 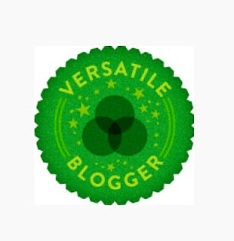 whereishappy was kind enough to nominate me for the Versatile Blogger Award.  (Over a month ago.  But again, why do TODAY what can be done after the mall closes?)  You can find the rules on her post. And you should check out her blog anyway, so go click on it.

Since I dropped my grocery money on shoes this morning, I’m not feeling too rules-y today.  But, as the award commands, I will post Seven Meaningful (and Potentially Creepy) Facts about Myself.

1. My tree has been up since October 24.  We put it up specifically because the hubs is a cardboard hoarder.

I may have mentioned in the past that I have an aversion to clutter.  Thankfully, the hubs is pretty good about not collecting useless crapola that belongs on the Goodwill truck; if he DOES hang on to something, at least it’s only ONE of the thing, not seventy thousand million of the thing.

(Well, wait.  That’s not entirely true.  He kind of hoards food.  Meaning, if one of the kids mentions that he likes a specific Luna bar, for example, he’ll buy ten boxes of said Luna bar.  But, the hubs is 6’4″, so frankly, he eats a lot of what he buys.  And he DOES toss it if it gets old or expires, so we’re not going to be featured in a TLC documentary anytime soon.  But currently, Target started stocking his favorite frozen pizza again, and there are now SEVEN of them in my freezer, despite the fact that there are THREE Super Target locations within spitting distance of my front door.)

Yet… the one thing that the hubs cannot seem to part with?  Cardboard boxes.  Whenever you buy a new computer monitor, video game, vacuum cleaner, etc., the rule is that you keep the box just in case the new item goes kaput and you have to send it back.  OK, I get that, but you don’t have to keep EVERY BOX FOREVER AND EVER UNTIL DEATH DO US PART.

So, since he’s been in and out of the doghouse these last few months, I announced one Saturday that we were cleaning out the shed AND the garage.  We have been blessed with a shizton of storage – we have a four-car garage AND an external shed.  Plenty of room for storing bikes, your mower, rakes, extra furniture, a helicopter, a few horses, and probably a national monument or two.

What we had?  Two cars, a workbench, an armoire, 4 bikes, a Christmas tree, and FOUR HUNDRED EIGHTY MILLION CARDBOARD BOXES.

So we excavated Mt. Cardboardicus.  Our township recycles cardboard IF you tie it neatly in 2′ X 3′ squares no more than 12″ tall.  That day, after cutting and stacking boxes and boxes from old appliances we no longer had and furniture we bought over a year ago (seriously – who is gonna mail a couch?  !!??!!) I ended up with two cardboard towers each about 4′ high.  A veritable…wait for it… skyscrapper. <rim shot>

But the good news?  I got to use a saw to cut the cardboard down.  Power tools are such a rush.  Even if you’re only using them to terrorize glorified paper, saws are awesome for channeling your inner Dexter.

Plus, I found my old rollerblades that I hadn’t been able to locate for two years, AND we unearthed the Christmas tree.  So, since we spent all that time digging it out…why not bring it inside?  Going ALL THE WAY to the backyard AGAIN to get it in a month or so?  Super inefficient.  I mean, you’re halfway to Target by that point.

Also, that night, the neighbors were having a Halloween party, and their yard was THOROUGHLY decorated.  I mean – Frankenstein automatons, fog, cobwebs….I have nothing against National Beg for Candy and Dress Like a Ho day, but for some reason, the juxtaposition of a lit tree beaming down on the graveyard zombie scene cracked me up.

Hey, someone’s gotta be first, right?  And this gave free license to our other neighbors putting their lights up, as well.  Including this one.  Although, if anyone actually has any clue what it’s supposed to be, you get mad props because I’m stumped.

Christmas kangaroo, anyone?  Kids, let this be a lesson: Lights first, cider second.

2. This is our tree topper:

Angels watchin’ over me, my Lord….

3. Last year, our tree didn’t come down until April.  Because again, PROCRASTINATION.  I had to finish our taxes first, ya know.  Hey, if there’s snow on the ground SOMEWHERE, the tree can stay.  MY HOUSE, MY RULES.

4.  Speaking of houses…Last year the kiddos and I made a gingerbread house.  Since we suck at all things art, we made it a crack house complete with a murder scene: 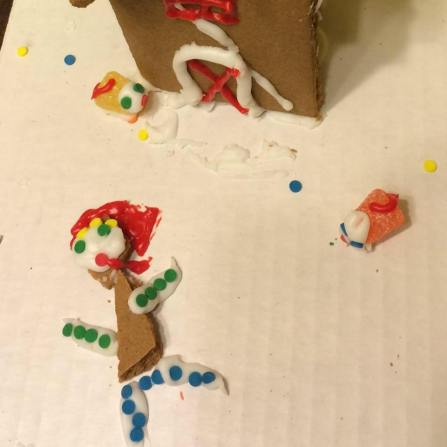 See the rats?  And the blood gushing from the head? And the door blocked off?  Parent of the year, right here, folks, molding tomorrow’s youth. 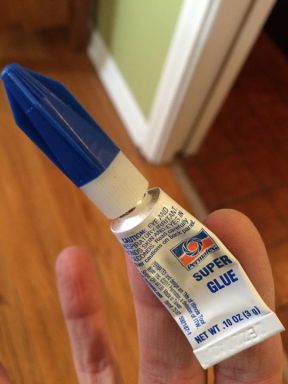 I come by it honestly, though.  I have fond memories of my aunt gluing herself to a hairbrush when I was a kid.  Who needs a DNA test to prove blood relation when you’re bonded by your lack of adhesive skills?

6.  My son isn’t good at art, either.  When he was in kindergarten, his class made a recipe book.  He needed to illustrate a favorite recipe from home.  I present to you “Ice Cream Pie.” 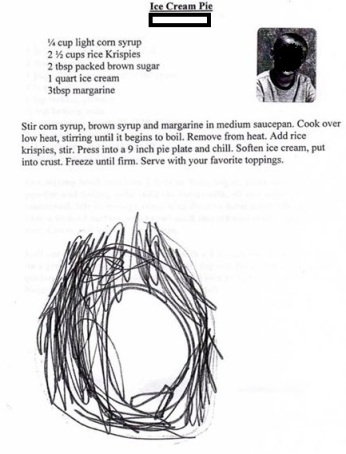 Brings tears to my eyes, it does.  TEARS.  Someday, when he’s the lead burrito assembler at Chipotle (yes, this is his current career aspiration,) we’ll be able to say “we knew him when….”

By the way?  I have never, EVER, made Ice Cream Pie.  Ever.  I asked him later why he chose this recipe.  “Mom.  It’s pie.  Anyone can draw a circle.”  Well, kiddo, clearly not EVERYONE.  Love you.

7.  I made my own pens.  This is a Big Deal because I suck at all things art (see above) AND because I very nearly failed shop class in middle school.  Apparently, I can’t smooth out a solder bead smaller than buckshot – my “lines” probably spell out something obscene in Braille – and when it comes to wood, straight lines and right angles are for non-creative types, in my humble opinion.  <turns nose upward>

The ONLY reason I passed Industrial Arts was because half of our grade was a written test to identify tools.  I got 100% on the test, but my projects are likely either polluting our planet in a landfill, or they’re a horrible joke circulating through a local club’s annual White Elephant Swap.  If you come across one of them, they’re SUPPOSED to be a metal pencil box and a wooden Tic-Tac-Toe board.  No, really.  Quit laughing.

But recently, I tried my hand at turning, through the help of a friend at work, and I MAKED THESE PENS ALL BY MYSELF (practically) AND I AM SO PROUD.

The red and the purple are fountain pens, because I so fancee.  And the purple pen has purple ink.  BECAUSE PURPLE.

Here’s a shot of Pen #2 in progress so you can sort of see how it’s done.

Essentially, you start with a “blank”, which is a rectangle of wood or acrylic or whatever.  (The orange is all acrylic; the red and purple are actual wood with added colored resins – kind of a hybrid of wood/plastic, which you probably guessed as purple trees currently only exist in The Lorax.)  Then you cut it, drill out the barrel, and turn it to get the shape. I got to use saws and drills and lathes and polishers and I STILL HAVE ALL MY FINGERS YO.

Plus, I have three very elegant pens.  I sign benefits contracts and written warnings with just a little more flourish.  It’s like using the good china for a grilled cheese sandwich.  Why not?  You’re worth it.

Next up will be turning a bowl.  Fingers crossed (while they’re still attached, that is….)