As you already know, I have some “food issues”* that I’ve been dealing with since I was ten, when a solitary comment from a friend of my brother caused a seismic shift in food’s role in my life.

(“Food Issues” = currently read: EDNOS, or Eating Disorder, Not Otherwise Specified, or, re-read: Eating Disorder, Not Committed Enough to Qualify As A Real Illness.  There’s actually a whole alphabet soup of different subtypes of eating disorders – you can read about them here.  I have a wardrobe full of ’em myself.  A few fit me better in high school than they do today, but I keep them around and try them on once in a while just for giggles.  Bulimia is the bell-bottom of eating disorders, anorexia is menswear – just when you think they start to look ridiculous on you, they come back into fashion and all the models are sporting them on the cover of Vogue.)

Before that time – when I was a kid, and didn’t know any better – food was a calm, tranquil creek.  When life had some hard edges, I could visit a favorite snack for brief moments of joy and delight.  (Not that life was all that dramatic when I was ten.  My biggest issues were probably the indignity of having braces and wearing really thick glasses AT THE SAME TIME. Trust me – highly traumatic, especially when you’re ALSO in band.  It’s the grade-school trifecta of uncool.)

Food was comforting when I needed it, and unobtrusive when I didn’t.  It was like a favored toy, satisfied to patiently wait on a shelf until I might want to take it out to play.

And play I did – heartily and often, with frequent trips to the convenience store for any one of the Hostess frosted confections (or those amazing little donuts with the crunchy bits on them!) topped off with an RC Cola or a Veryfine Papaya Punch.  (Which, sadly, no one seems to make any more.  Boo.   It was refreshing, not too sweet, and was the color of sunsets.  The perfect accompaniment to BBQ Corn Nuts.  I haven’t had a beverage with calories in years (except wine, duh) but I still wish they had it, because I might want it SOMEDAY, ya know?)

There was more.  Pizza and Pepsi every Friday.  Homemade Tollhouse cookies.  A large casserole of scalloped oysters at Thanksgiving, and a fruitcake at Christmas, “because Katie loves them.”  (As I write this, it suddenly strikes me that these were treats that Mom loved, too.  I wish she had realized that it was perfectly OK to make them even if SHE was the only one who wanted to eat them.)

And there was always good food at Grandma’s house.  From Dad’s mom:  chocolate pudding – the kind you cook on the stove, of course – made with marshmallows and served warm, with milk, in Depression-glass dessert dishes.  JiffyPop served in green glass bowls.  Frosted chocolate-walnut refrigerator cookies (which, despite reading many recipes and attempting several trial batches, I have never been able to replicate.)  Smokehouse almonds and 7-Up.  Cashews after piano practice.

Mom’s parents also fed us well.  Grandpa was a fisherman (who, as I’ve mentioned, used to nail salmon heads to trees), so Saturday dinner at Grandma’s place meant a fish fry, complete with her famous yeast rolls: 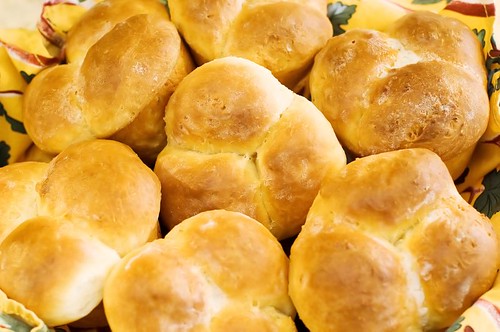 Man, I could eat four of those during a meal.  FOUR.  And one or two for snack later on.  Makes me realize how innocent I was….I had absolutely no idea about the frightening number of white-flour calories I was ingesting.  (Nor did it occur to me to care.  Ah, youth.)  My sister, the quintessential picky eater, pretty much lived off these rolls – these, plus Grandma’s deviled eggs, filled her plate for every holiday meal.

Yes, zucchini – the vegetable that you only grow if you have a TON of friends, and if that ton of friends are people you want to have avoid you all summer lest you share the crop that keeps on cropping.

Even if you’re not a fan, you have got to try zucchini crisp.  Really.  It’s surprisingly good.  If you like apple crisp, you’ll be all over this.

OMNOMNOM.  I actually made a version of this over the summer – without butter, of course, because butter is terrifying, and with honey instead of white sugar.  And it was delish all the same.  I promise this isn’t some cruel joke, like raisins in cookies or white chocolate in your Easter basket.  It’s legit awesome.  And reminds me of Grandma.

For the first ten years of my life, food was a celebration.  Food was an expression of love.

And then one day, suddenly, one comment turned food from friend to foe.  From best friend to mortal enemy.

Food – the security blanket I turned to when craving love and affection – responded to this spasmodic paroxysm by transmogrifying from a much loved teddy bear to a hulking, sinister bully.  It recruited the scale as its dictator and judge, and together, the two mocked, harassed, and tortured me.

(And you thought Decepticons were terrifying.  Sure, stuff blew up, and people died.  But Megan Fox was still skinny.  AND HER WHITE PANTS STAYED CLEAN.  I wasn’t even allowed to wear white pants until I was…well, by then I was too fat for white pants.  Besides the fact that they do nothing to smooth, soften, or minimize, you also have to plan your undercrackers carefully, because you can see the print – stripes, polka dots, and baby ballerina whales – RIGHT THROUGH most of them.  So no white pants.  But I digress.)

So what does a day of food look like now?

Now, normally, I don’t eat quite this much packaged food.  But I wasn’t going to be home for lunch or dinner, so I had to pack food that could travel.  Otherwise, dinner would likely be something predictably healthy, like baked fish and a veggie. Or a stir-fry.  (And I couldn’t show you a picture of tonight’s dinner, because, well, it was SUPPOSED to be curried squash and potatoes (465 calories,) but I had 45 lives hoarded on Candy Crush, and it’s level 492, which is HARD, and somewhere between “hey, I got time” and “is something burning?” I cooked those cubes which I VERY painstakingly chopped into uniform pieces down into a gargantuan wad of bright orange wallpaper paste.  Despite its attempts to resemble fluorescent mudding compound, it was actually pretty dang tasty.  Just not terribly photogenic.)

Anyway.  The point here is that 1200 calories is…not a whole heckuva lot of food.  The breakdown:

And, if I stick to this very religiously (as I explained here), I can expect to lose roughly a half pound a week.

With maybe four exceptions to the 1200-calorie-a-day rule (seriously, I can count on ONE hand how many meals have been off the boat, and have one finger left over.  GUESS WHICH ONE) here’s how this has played out in reality over the last few weeks:

As maddening as this roller-coaster ride has been, I guess I HAVE lost ten pounds in eight weeks.

And a magical being needs magical hair…right?

So I treated myself to some color today:

AND IT DOESN’T WEIGH ANYTHING.

Unfortunately, it isn’t cheap.  Neither is a bad shoe habit.  Or new clothes.  Or all the nose rings I want from RockYourNose (which you should check out – her stuff is amazeballs.)

But with all the drama as of late, my ego has taken a beating.  So, while I haven’t found the exact recipe for the perfect frosted chocolate-walnut refrigerator cookie, or a palatable low-sugar, gluten-free fruitcake, I think it’s perfectly OK to indulge in some pretty, shiny things here and there.