But it’s been a week and it’s bugging the crap outta me, so instead of actually sitting the hubs down and TALKING about it, I’m gonna chuck it out to the interwebz for everyone to look at.  Because I’m a mature grownup and all that shiz.

So anyway.  I was trapped on a hella boring conference call and “multi-tasking” (read:  paying ZERO attention, because social media is WAY more entertaining than the nuances of OSHA’s Final Rule on accident reporting) when I saw this post from a cousin-in-law on Facebook: 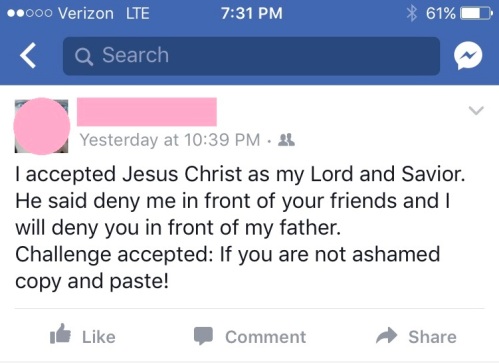 OK.  I know this relative pretty well.  She’s an absolute sweetheart.  I like her a lot.  And for the record, she hosts barbecues, swears, and drinks beer, and she’s never shoved anything down anyone’s throat regarding what they should or should not believe.   In other words – she’s pretty cool.

I’m not put off by this post, even though I generally don’t do the whole “like if you agree” or “copy and paste or a unicorn dies” thing on social media.  Of course, on occasion I’ll make a sarcastic play on a Facebook fad just for funsies.  Like the recent wave of “post ten concerts you’ve seen but one is a lie” – I really wanted to play, but the list of artists I’ve seen live is woefully underpopulated, save some middle-school band performances and cantatas we do at church.  So: 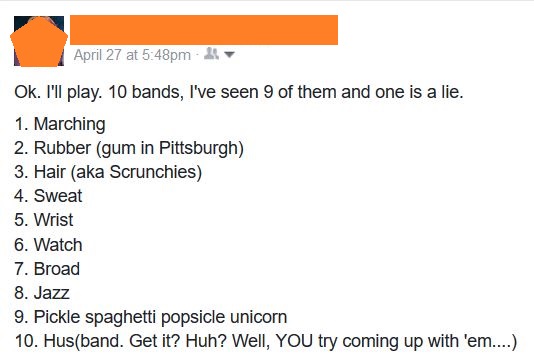 Anyway.  The point is, post whatever you want on YOUR page.  In my cousin-in-law’s case, she was sharing her views and NOT HURTING ANYONE.  Social construct dictates that the appropriate response is to either click “Like”, or shrug/roll your eyes and keep scrolling for videos of baby goats having a pajama party.

Well.  Maybe not, as I saw this reply from the hubs….

Some background:  the hubs kind of grew up with this cousin and her brother.  The hubs is about ten years older, but he was firmly locked in the “kid” role at family gatherings, so they spent a lot of time together at holidays and reunions and stuff.  Essentially, he was the cousin she always looked up to – which probably means she took these three little letters to heart.  Incidentally, she also has bouts of anxiety, and comments like this surely don’t help.

As you probably recall, the hubs is militantly anti-religion, and likes to be absolutely certain everyone knows it by expressing these thoughts on his bumper stickers, his T-shirts, to strangers at the grocery store wearing religious garb…at which point I walk away and hide behind the produce, praying I don’t knock it over.

To his credit, he’s toned down significantly…at least around me.  But now we have this not-so-subtle Facebook jab.  I felt compelled to respond – partially because his Facebook profile pic is a photo of the TWO of us, and I don’t want people to assume I’m on Team Teardown. 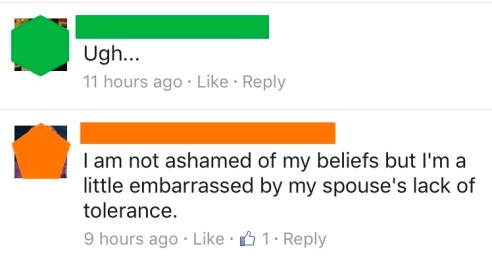 OK, immature or not, that right there is freakin’ hilarious, amiright?  I was a little hesitant to come home from work that day <nervous chuckle> but sometimes, a good stinger is sooooooooooo worth it.

And what happened when I did arrive home?

He didn’t even mention it.

Which got me totally overthinking (because I’m female, and this is what we do, yo.)  Is he waiting for me to bring it up?  Is he plotting his revenge?  Did he even SEE it yet?  (Side note:  The hubs has the impressive superpower of NOT being obsessed with social media; he doesn’t automatically jump at the <ping> of a new notification.  This makes texting him urgent messages a frustrating exercise in futility – if you need something at the store, for example, you have to reach out caveman-style and actually call him.  He doesn’t even read all his emails the same day he gets them.  So it’s entirely feasible that he hadn’t even READ Facebook since he posted.  Weird, huh?)

So I dutifully play the role of a socially-stunted preteen and also say nothing.

But, the next day, I noticed a response: 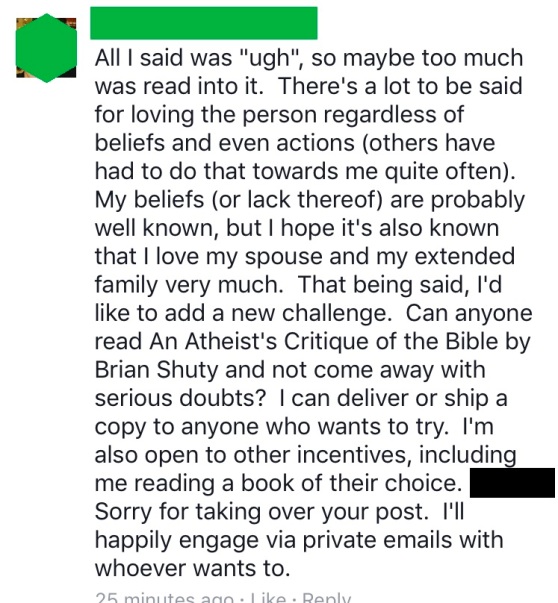 First – I read too much into “Ugh”?  Well, then, what the hell was it SUPPOSED to mean??!  (As one of my dear friends put it: “It means exactly what you think it means.”)  Nice backpedal, honey.

Second – I suppose it’s progress that he admits we have to put some work into loving him around his <cough> outspokenness.  It’s somewhat encouraging.  Maybe some of our conversations have actually…gotten through to him?

Third – Aw, he loves me, even though I’m apparently misguided.  (I must be really hot. HAHAHAHAHA)

Fourth – I’ve read some of that book, and…no.  The reviews site helpful feedback such as “use of crude street language” and “meant to be a sarcastic rant” – tell me if this is something you’d hand to a conservative person to convince them of the error of their ways.  I figured there HAD to be a more balanced tome out there, plus I find it amusing to throw kerosene on a blazing dumpster fire, so I responded one more time: 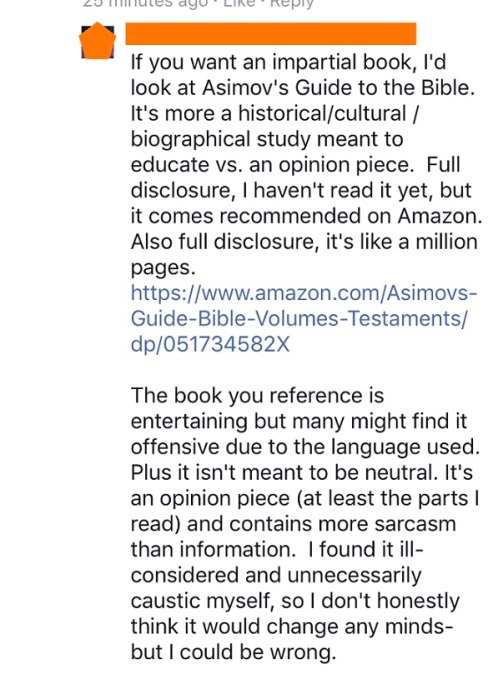 So how did the hubs react?

But this probably isn’t because the hubs is as emotionally immature as I am, passively-aggressively ignoring the mental hippo poo in the middle of the living room.  More likely, it could be because when I saw that he had written himself a reminder on a hot-pink Post-it note, which said “check FB post”, I may or may not have given it the equivalent of cement shoes and a dirt nap in the recycling bin.  YOU CAN PROVE NOTHING.

In the spirit of self-education, I did ask a pastor friend for some recommendations for books that might appeal better to all sides of this complex equation.  Here were his suggestions:

There Is a God:  How the World’s Most Notorious Atheist Changed His Mind.  Might be an interesting read, but I can tell the title will be off-putting.  And honestly, I’m not interested in converting anyone – heck, I’m still traipsing along my spiritual journey and believe a lot of things both inside and out of the bounds of traditional Christianity.

Fool’s Talk:  Recovering the Art of Christian Persuasion.  This might be OK for me to review, but again, not a label that the hubs will find compelling.  So…maybe later.

The Language of God: A Scientist Presents Evidence for Belief.   Ooh, it mentions science.  This has potential.  The reviews make it sound like it kind of morphs away from a literal Bible interpretation…but that might make it palatable for someone who wants to reconcile science with faith.

Anyway.  The subject seems to be forgotten at the moment, so perhaps letting sleeping rabid wolfhounds lie is the best course of action at the moment.  Still, one day I’m certain it will resurface, so I’ll at least have some suggestions for ways he and I can learn together.

And, honestly, there’s no rush.  We’ve been getting along swimmingly as of late.  Yes, we’re avoiding some of the more tender spots, but we’ve had the opportunity to reconnect in areas where we DO fit together.  Today we enjoyed a long hike (six miles, thankyouverymuch) through a local wildlife refuge, and the spring rains got all the flowers to yawn and stretch while the trees and mosses turned green. 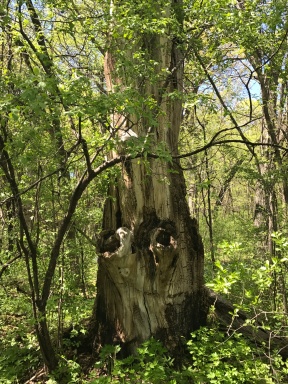 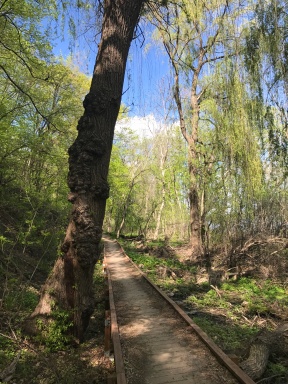 There were violets in every shade of purple, alongside white and yellow:

And in celebration of diversity, some other flowers joined the festival:

It was a gathering of all things, great… 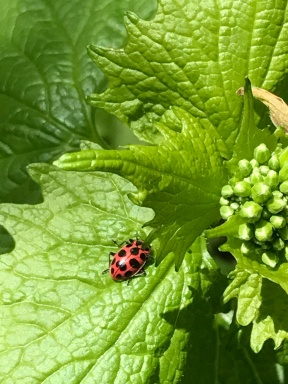 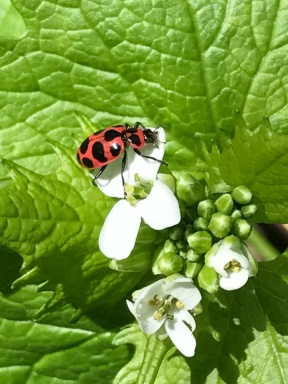 There was nothing about today that wasn’t beautiful.  It was a gift wrapped in sunshine and adorned with a violet bow, delivering a message directly on the path in front of us: 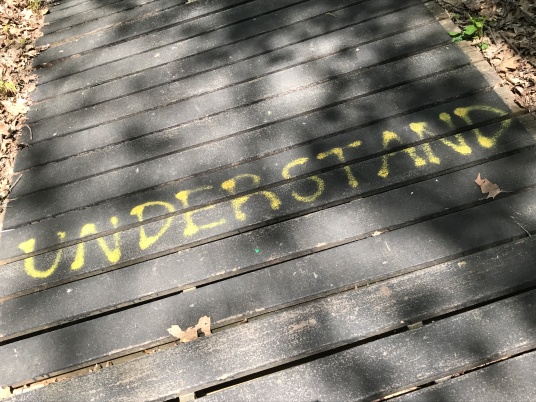 Not a bad goal.

I’m trying.  And I hope he’ll continue to try, too.

16 thoughts on “Facebook Fights Are No Walk in the Park”