WARNING:  The acts described in this post were performed by trained professionals who had zero f*cks to give about their careers.  So unless you prefer a life of couch-surfing and Ramen, DO NOT TRY THIS AT HOME, KIDS.  Leave it to the experts and the independently wealthy.

So how was YOUR April Fools’ Day?

In all honesty, I pretty much forgot about it.  I wasn’t at work, so I simply didn’t have a ton of people around to mess with.  Plus, yesterday I was in the biggest funk I’ve been in since I started my new medication, so I spent the day firmly planted on the sofa watching April the Giraffe NOT give birth yet.  (Seriously…I have probably lost 48 hours of my life watching a giraffe that’s probably just sporting an impressive food baby.)

But, in browsing my Facebook memories, I found this:

Yes, I had a Blackberry.  It was six years ago.  Cut me some slack.

The woman in green was one of my direct reports.  Never let it be said I’m one of those stuffy bosses steeped in formality.  🙂

Since I had just given notice, and absolutely DESPISED my manager, I may have gotten just a little carried away with the festivities.  (Side note:  My boss was one of those outdated stains on humanity who truly believed that women belonged only at home, barefoot and pregnant, supporting their husbands.  And, when someone stole over $800 from our United Way fundraiser, he told me – and I quote – “that’s what you get when you start hiring ‘diversity.'”

And yeah, I reported him to our ethics committee and yadda yadda, but somehow he was still my boss after that.  So I quit.  And then had some fun.  Because what were they gonna do, fire me?)

So I heartily embraced April Fool’s Day in 2011.  By the end of the day, my poor coworker was pretty much ready to KILL ME.  See, she wasn’t too fastidious about locking her PC before she left her desk.  This enabled me to “correct” her email signature to indicate that she was the Goddess of Paper Cuts.  I also set her email to auto-reply that she had run away to pursue her lifelong dream of raising and training crickets so that she could open a mini-circus (because fleas are so overdone, ya know.)  And, of course, I flipped her screen upside-down so she had to read all of this while standing on her head.

I wish for the life of me I could remember what I put in the printer.

I didn’t neglect the rest of the office, though.  I recall attaching a sign to the coffee machine indicating that it was now voice-activated…so just speak your selection!  Our Senior Controller – second in command at that office, after my boss – came over, red-faced and caffeine-deprived, asking my co-worker, who was in charge of vending management, for assistance on the new feature.

So, a couple of years ago (and two jobs later), my new team returned the favor.

We’d had an absolutely brutal winter in this part of the country, and the snow was piled up a good nine feet (!!!) outside my office window.

Hard to see, but that’s a pink flamingo pen on my desk., next to the boxing horse pen and the giraffe pen. 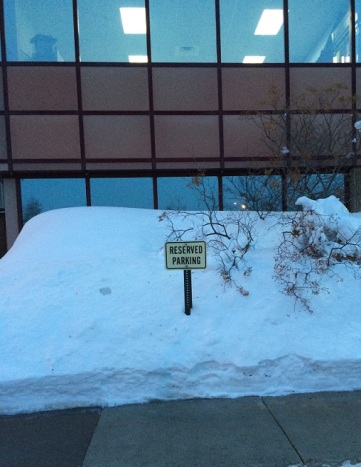 My window is the 2nd window from the right.

Since I couldn’t really see outside, one of my team members donned his snowmobile suit, grabbed a spare coal shovel he found in the closet, and went to the sidewalk and started to dig….

Never underestimate the power of motivation.

…and eventually, he found my office window.  He left me a couple souvenirs to improve my view.

The face is a mask made from a picture of one of our VPs.  They dressed up like him for Halloween that year.

Impressive, huh?  Even more fun was when he surprised me by crawling BACK in there right before lunch.  I turned and the resulting scream brought the CFO running downstairs to see who was being murdered.

I love my company.  LOL

So it’s generally been quiet since then…until recently, when one of our VPs (not the guy who inspired the mask) thought it would be hilarious to plant a plastic bug under the earpiece of one of our phones.

He’s only been there two years, and CLEARLY didn’t realize that doing this means it is ON LIKE DONKEY KONG.

He likes candy, so we left him a little gift.

Yes…we are woefully immature.  And fortunately, we know our audience well enough to pull this off.  The VP came over IN TEARS.  “I wanted to poke it.  I KNEW it was candy but I just COULD NOT TOUCH IT.”  Then he paid it forward by leaving it in the desk of his Director of Operations.

I can’t wait to see what he bunts back.

Sometimes, something turns into a gag accidentally.  For example, there is a national  HRIS software company with an overly-ambitious marketing department who occasionally sends us creative little bribes to get us to look at their product.  Last spring, they sent this:

Apparently, it was a baseball bat and baseball.  (No, really.  Look again.)

We didn’t buy it.  The software OR the presentation.

But it could have been much worse, as a friend of mine discovered earlier this week.

It was an otherwise-normal Thursday when my beautiful friend S received a fairly nondescript package from the afore(un)mentioned software company:

“Do your Payroll/HRIS systems need a Spring Cleaning?”

She opened the box to find a reasonably cute tchotchke:

A mini-trash can.  That’s new.

Hmm.  There’s something inside…. 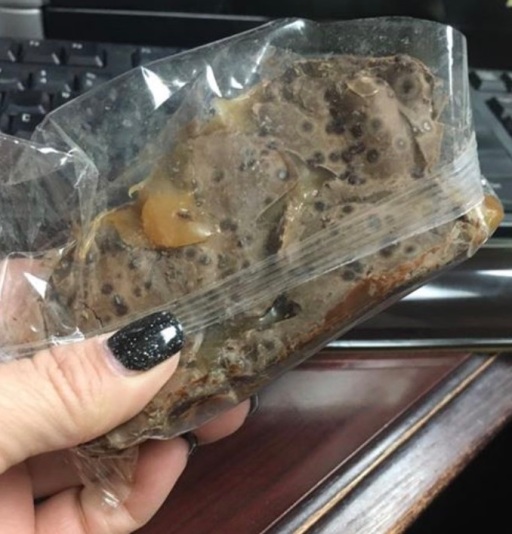 It was SUPPOSED to be chocolate-covered caramels:

A surviving set.  And again, those nails.  LOVE

But they sort of forgot that the southern part of the US can get a little warm by the end of March, and ended up shipping what looked like a giant blob of fibrous seeded poo.

Not that it matters, because who’s lining up to eat candy from a garbage can???

I have no good way to wrap up this post, so here’s a random screencap from Snapchat where I face-swapped the hubs and my cat.

I honestly don’t know how to feel about this.  I’m totally creeped out yet CANNOT. STOP. LAUGHING.

Did you pull any wool on April Fools’?  Share your wins and fails in the comments!

34 thoughts on “April Fools: Jokers on the Job”